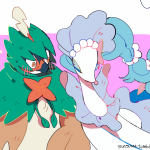 Hi this is Goldensunsheba. You might remember me From Tumblr or Deviantart. I'm a silly person who likes to watch cartoons and play video games. Also I enjoy drawing and playing card games.

Name: I'll give you a hint, it's the first part of one of my Favorite Characters, minus the Dot.

Roleplay Type: I prefer Canon Roleplays, I love playing my favorite characters and making them suffer. But I do play Oc characters also *Points at Ammolite*

Earth and Space (On Weekends)

Sworn alliance with Pink Diamond this rebel pilot made her way to earth and has been working alone doing her own thing for sometime. She has been on Earth for well over 3000 years wondering from place to place until she finally arrives at Beach city and her adventures and mishaps begin.

Ammolite is a inspired and creative gem, coming up with new idea and exploring the world and things around it. Her sense of curiosity tends to get her in a lot of trouble even when she doesn't mean to cause any harm at all. Her constant need to find out what something does may cause her to act naive and even a little ditsy at times.

Despite her naive nature she is not stupid. She has learned a lot within the 3000 years of being on Earth and has learned about human customs. She can relate very well with humans. She's a loving and welcoming character who tends to try and take things peacefully before resorting to violence as she believes every one is a friend.

Ammolite has a slender type build and her skin normally is a light baby blue color. Her hair is very curly and reaches past her shoulders. It starts light violet from the top and goes all the way done to a dark blue through the colors. Her eyes shift through the various colors as well. Her gem is in the shape of a star and located under her right eye. She wears a tee-shirt with a shooting star on the front that shows her mid rift, normally the sleeves are pulled off her shoulders and down to her forearm. She wears a knee high blue skit matching her top and rainbow colored tights that go all the way down to her black shoes.

Her previous regeneration are not know what she once looked like.

Ammolite possesses traits and abilities that are common among all Gems.

Ammolite was originally designed to be a pilot gem, one who steers and direct warships. The only problem is she came out faulty. When in the pilot seat of any ship she is bound to accidentally crash the ship. On more than one occasion Ammolite has fiddled with human and homeworld tech and managed to break it.

But she has a special ability that allows her to camouflage her entire body into her surroundings, this works only if she is completely focused, if something causes her to be come emotional though her colors will change. Her color change on her modes, when she is sad she grows dark blue, when happy, bright yellow, when embarrassed, light pink and if angered dark red.

Her other ability includes super speed, this requires full attention which can be very difficult for Ammolite since she can get distracted easily. But when in a pinch time seems to slow for her and her movement becomes incredibly speedy.

Ammolite has many relationships with characters from different roleplays. For now I will focus on her deepest relationships.

Ammolite has developed a strong united friendship with Peridot long before she was captured by the crystal gems. Ammolite has proclaimed herself several times as Peridot's best friend and is very fond of her. She tends to follow her around like a lost puppy and is always excited to see her. When she's around though it appears that Peridot's tech always seems to fail.

Ammolite doesn't know too much of the Crystal gems but when introduced she took a liking to Emerald. ((Perhaps her favorite color is actually green)). She didn't hesitate to release Emerald from the tablet she was sealed away in and in fact befriended the corrupt fox version of herself.

Even though Ammolite has no idea what love really is she is very fond and affectionate towards Emerald and she is the closet person to her and she cares deeply for Emerald and hopes her feelings are returned.

Not much is known on the full extent of their relationship but Ammolite has known Onyx from other roleplays and has grown to understand and accept her.

Pink Topaz is a good friend to Ammolite and Ammolite enjoy's being around her and working together with her. She is very accepting of her and continues to support Pink Topaz even in harsh times.

Ammolite likes Pearl a lot and tries to learn as much about fighting as she can from her. Since her weapon and Pearl's weapons are very similar Ammolite likes to ask her for tips and tricks. Their relationship though can be somewhat strained because of how goofy and silly Ammolite acts, and for the fact she clumsy and not very organized like Amethyst.

Ammolite likes to play along with Amethyst and her pranks. They are normally considered trouble makers if they are not working on a mission together. Put when on missions they can work well off each other.

Ammolite respects Steven's outlook and usually agrees with him when trying to make friends, she'll normally be friend anyone she meets just like he does. She's very open minded about him and respects him as one of the Crystal gems.

Not too much is known about their relationship as Ammolite gets really nervous around Ruby and never really quiet understands what love is. She works well together with her though. 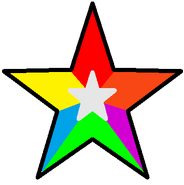 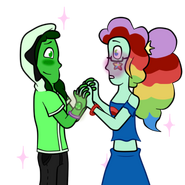 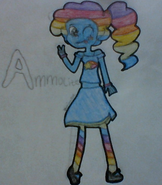 Add a photo to this gallery

Add a photo to this gallery

Retrieved from "https://sufanon.fandom.com/wiki/User:Goldensunsheba?oldid=215725"
Community content is available under CC-BY-SA unless otherwise noted.